The Week Ahead: Time To Get a Jump On The January Effect?

The Week Ahead: Time To Get a Jump On The January Effect?

The stock market was generally higher last week led by the 2.3% gain in iShares Russell 2000 (IWM). This was impressive compared to the 0.4% gain in the S&P 500 or the 0.14% loss in the Dow Industrials. The Dow Transports fell 1.0% while the Dow Utilities lost 1.4% for the week. Nevertheless the advancing stocks led the declining stocks by a healthy 2 to 1 margin.

In a holiday shortened session on Friday the US market seemed to ignore the 5.5% drop in the Shanghai Composite and the 2% drop in Hong Kong's Hang Seng Index. This could still be a problem on Monday if the selling in the Asian markets continues on Sunday night.

The strong performance by IWM was consistent with the improving daily technical studies and positive seasonal trends I reviewed in last week's "Don’t Give Up On These Stocks". Of course the seminal work on what is commonly referred to as the January effect was published in 1942. This report by Sidney B. Wachtel "Certain Observations on Seasonal Movements in Stock Prices" can still be found at Chicago Journals. 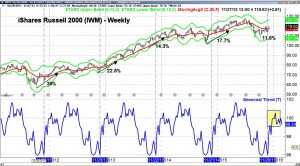 Basically this seasonal trend is attributed to tax loss selling of small caps in mid-December followed by new buying as we enter the new year. An expanded look at the weekly chart of the iShares Russell 2000 (IWM) goes back to 2011 and shows that the seasonal low has ranged from November 25th through November 20th.

Typically IWM forms a short term peak in the middle of January and then declines until the middle of March when IWM again starts to rally.

For example the IWM made its fall low during the first week of October 2011 and gained over 10% before the seasonal trend low on November 25th. By the first week of February the following year the IWM had gained 39%.

In 2012 the IWM bottomed in the middle of November which was one week before the seasonal low on November 23rd. By the first week of January IWM was already up 16% and at the late February highs it had a gain of 22.8%. In 2013 the rally lasted until late March before there was a significant correction.

Since the low in early October 2015 the IWM is already up 11.8% and appears to still have significant upside potential going into the early part of 2016. The close on Friday was right at the November high, line a. As I noted in an 11/26 Tweet the Russell 2000 A/D line broke through its resistance on Wednesday November 25th. This suggests that prices should follow.

The daily and weekly OBV are both above their WMAs but the volume last week was not that impressive. A couple of days with much better volume (>35 million) would help support the bullish case. The daily relative performance has broken its downtrend, line b, and has moved above its prior high completing the bottom formation. This indicates IWM is becoming a market leader.

The weekly OBV has moved back above its WMA and the weekly relative performance analysis appears to be completing a bottom. There is initial support now in the $73.50 to $71.36 and the 20 day EMA.

The monthly Consumer Confidence last week came in at a dismal 90.4 from the prior month's revised reading of 99.1. The decline was apparently due in large part to a lowering of optimism about the job market. It was well below the consensus range of 96.2 to 102. 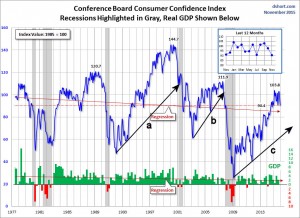 The chart shows that in the past the breaks of the long term support has often coincided with the start of a recession. in 1999 the Consumer Confidence started to fall sharply and eventually dropped below support at line a.

The Consumer Confidence was much weaker during the 2003-2007 recovery as it peaked well belwo the 1999 highs. The pattern of higher lows, line b, was violated just before the start of the recession. The chart shows that there is current support now in the 85-87 area while the uptrend is much lower in the 68-70 area, line c.

The Consumer Sentiment data from the University of Michigan ended the month at 91.3 which was below the mid-month reading of 93.1. It was encouraging that the current conditions component showed little change as we enter the all important period for consumer spending.

Ahead of the monthly jobs report on Friday we get the ADP Unemployment report on Wednesday as well as Productivity & Costs. Thursday we get the PMI Services Index and Factory Orders.

The action last week was not that impressive though the rebound from the mid-month lows has reduced some of investor's fear. According to AAII the bullish% rose 1.4% last week to 32.4% while the bearish% fell 4.5% as 1.6% moved back into the neutral camp.

Last week's data on the consumer indicates they are now less optimistic than they were at the start of the fall. The full slate of economic data this week culminating with Friday's jobs report will once again turn the focus back on the FOMC meeting on December 15-16.

The monthly, weekly and daily technical studies are positive for the stock market though they have started flattened out over the past week or so. Therefore in order to rule out a near term pullback the market needs to prove itself on the upside this week.

December is historically one of the best months as for the last seventy years it has averaged a 1.8% gain. Using Friday's close at 2090 this means the S&P 500 could close the month in the 2125-2130 area. So far the S&P 500 is up about 0.5% in November which is what seemed reasonable from a historical perspective in the middle of the month.

The oil & gas along with the consumer good stocks led the market last week, gaining 1.3% followed by a 1% rise in the health care stocks. Material and consumer stocks were both up around 0.3% while technology stocks lost 0.5%.

The monthly chart of the Spyder Trust (SPY) shows the strong close above the September doji high (see arrow). This high close doji (HCD) buy signal was first identified and written about by John Person. The monthly starc+ band stands at $227.60 with the 20 month EMA at $202.47. There is major support on the monthly chart in the $178-$171 area.

The monthly S&P 500 A/D line is above its WMA and now very close to last May's highs, line b. An upside breakout this month would be a very positive sign for 2016. The monthly OBV does not look as strong as it has just rebounded back to its declining WMA. The OBV resistance at line c needs to be overcome to turn it positive. There is important OBV support now at line d.

The weekly chart shows there is now strong resistance in the $211.60-$212 area. If it is overcome then the SPY could reach the monthly pivot resistance at $217.28. The 20 week EMA held on the recent correction and now represents major support at $203.27.

The weekly S&P 500 A/D line is still just below its downtrend, line f. It will be important that the A/D line hold above its WMA and the support at line g, on any correction. The OBV has been acting stronger than prices for the past month when it moved above the 2014 highs. 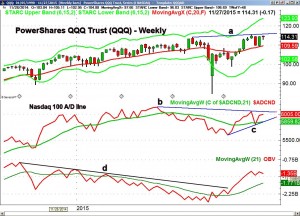 The Powershares QQQ Trust (QQQ) was down slightly for the week as it is just below the early November high all time high at $115.47. For December the pivot resistance stands at $119.08 with the weekly starc+ band at $123.93.

The Nasdaq 100 A/D line failed to make a new high with prices in early November (line b). There is now key support at the mid-November low and at line c. A break below this level would quite negative.

The weekly on-balance volume (OBV) bottomed out at the end of September and is still well above its rising WMA. It is still below the September 2014 high. The daily A/D lines and OBV (not shown) are above their WMAs but are not currently showing any burst of upside momentum.

The flat action in many of the technical studies allows for either a overall market correction or a period of sector rotation where the small cap stocks could shine. The narrow price action does not favor establishing new low positions in the market tracking ETFs at current levels as they are too far above support.

I would favor the small cap stocks on a pullback and investors may want to look at the Royce Value Trust (RVT) . It is a closed end fund that is currently down 8.6% YTD. It has done well over the long term under the guidance of Chuck Royce. It closed Friday at a significant discount to its net asset value and has key support in the $11.80 area.

It is clear from the monthly studies that the December close may have important implications for the start of 2016. So while my outlook is still positive investors should not relax. Be sure that you have a clear plan for your portfolio and stick with it if the market corrects.

Editor's note: If you like Tom's analysis and want specific entry/exit advice on ETFs check out ViperETF.com, his premium newsletter.