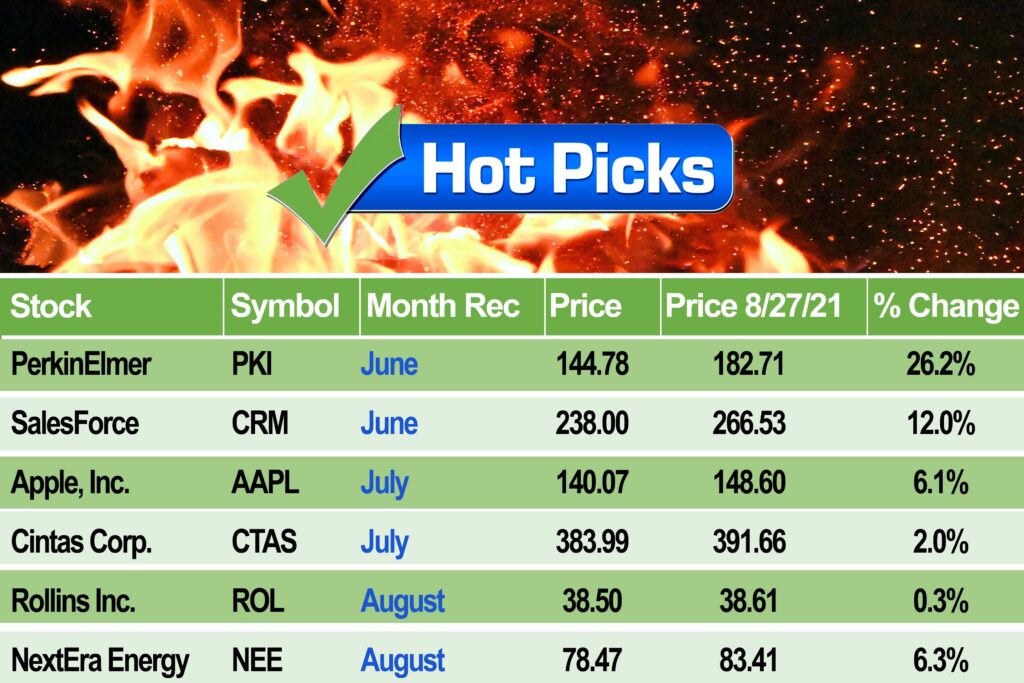 August 29, 2021: The much anticipated Jackson Hole speech by Fed Chair Jerome Powell gave investors just the assurance they needed to ignore concerns over a possible earnings peak and surging COVID-19 cases. It has been a record-breaking earnings season, with 87% of the S&P 500 companies beating earnings estimates for the first time in 30 years. There are also signs that analysts will increase third-quarter estimates further before October.

It was a solid week of gains for the market averages. The gains were led by the iShares Russell 2000, which was up an impressive 5.1%, but is still in a broad trading range, as it is below the March highs. The Dow Jones Transportation Average gained 2.4% last week, just a bit better than the 2.3% rally in the Nasdaq 100﻿NDAQ﻿.

The S&P 500 was not far behind with a 1.5% gain for week, and is now up 20.1% year-to-date. The SPDR Gold Trust responded positively to Fed Chair Powell’s comments as it was up 1.5% on Friday and 2.1% for the week. The more defensive Dow Jones Utility Average was down 2% last week.

On the NYSE last week, 2541 issues advanced and 954 issues declined, which supported the positive price action. Before last week’s action, the weekly NYSE All Advance/Decline line and NYSE Stocks Only Advance/Decline line (see chart) had been declining while stocks moved higher. Both were in danger of dropping below their exponential moving averages (EMA) which would have been a negative sign but instead have turned higher. Neither A/D line has made a new high yet, but could in the next few weeks.

I have had a cautious near-term outlook on the overall stock market for the past month due to a number of factors. The daily chart shows that the daily NYSE Stocks Only A/D line peaked in June and then broke its uptrend (line a) that went back to late January. The A/D line has since formed lower highs (line b) while the Spyder Trust (SPY)﻿SPY﻿ and Invesco QQQ Trust (QQQ)﻿QQQ﻿ (not shown) have made a series of new highs.

This is a sign that the many common stocks were not participating in the rally and that the stock market’s rally was narrowly based. That was not the case last November when all of the advance/decline analysis was strong, which meant as I stated then that “technical and sentiment data clearly means that it is a green light for stocks as we finish 2020”.

Another market concern was that fewer NYSE stocks were making new highs as the overall market moved higher. The New Highs have dropped sharply since the May peak and had been range bound (line c) since late June. This deterioration was supported by the July increase in New Lows as they surged to over 120 on August 19 (point e). This was another sign that the current rally was narrowly-based.

Even though I continue to think that a 5-10% market decline would not be surprising, there are still likely to be stocks that move higher even when the averages move lower. Since June, I have had two stock recommendations each month that were selected using a combination of momentum, volume, relative performance, and chart formation criteria.

Of my past six recommendations, PerkinElmer﻿PKI﻿ (PKI) has been the star performer since it was recommended almost three months ago at the end of May. PKI is up 26.2% since May 31, 2021. The weakest performance has been by Rollins Inc. (ROL), which as of Friday’s close is up only 0.3%. You can find my recommendations from the last three months at the following links for June, July, and August.

When there is a weekend just before the end of the month, I generally start running my monthly scans, as in my experience the chances of a major reversal in the last few days of the month is low. There are two stocks that I think should do well in September, even if the market does correct.

JELD-WEN Holdings (JELD) is a building products and equipment company that manufactures as well as designs doors, windows, and other home building components both in the US and overseas. JELD is up 11.4% so far in August as it is trading well above the July doji high of $27.24.

The monthly relative performance (RS) versus the S&P 500 has moved above its weighted moving average (WMA), which is a sign that JELD may becoming a market-leading stock. A strong move in the RS above the resistance (line b) is needed to complete the bottom formation. The volume increased in August, and the monthly On Balance Volume (OBV) has moved back above its WMA. The OBV was stronger than prices in early 2021 as it made a clear new high, and now shows good support (line c).

Pure Storage, Inc.﻿PSTG﻿ (PSTG) is a computer hardware company that develops all-flash data storage hardware and software products. PSTG also formed a doji in July, closing at $19.52. It closed at $24.06 last Friday, up over 23% for the month. There is initial support now from the April high at $22.63, which corresponds with the preliminary monthly pivot for September at $22.60. A monthly close above the resistance at $29.52 (line a) would project a move to the $50 area.

The monthly RS has moved above its WMA in August and a rally above the downtrend (line b) will confirm it is a market leader. The OBV surged to an all-time high at the start of the year and has held well above support (line c) on the pullback. The OBV is back above its WMA.

Both of these stocks are definitely extended on the upside and one should look for at least a 5-8% pullback in order to reduce the risk on new long positions. That is especially important as we head into September. Since 1950, the S&P 500 has had an average return of -0.62% in September, with 32 up years and 39 down years.

There is a full economic calendar this week, culminating in the monthly jobs report on Friday. The yield on the 10-Year T-Note rose last week, but so far there are no strong signs that yields have bottomed. A rise in this yield above 1.40% would be a sign that yields have turned higher.

The positive action of the S&P 500 and Nasdaq 100 Advance/Decline lines last week should lead to further new highs in the next several weeks. This does not mean we will not see a 5% or greater decline before the end of the year. This sort of correction would, in my view, improve the longer-term positive outlook for the stock market.

A higher level of pessimism about the stock market is needed to lower the overall market risk. As such, risk should be the main consideration for all new positions. Longer-term investors should just stay with existing holdings, as a deeper correction is likely to be followed by new highs.

If you are interested in learning more about the markets and want specific ETF or stock advice I hope you will consider the Viper ETF Report or the Viper Hot Stocks Report. Reports are released twice a week for only $34.95 each per month.

Tom Aspray 12 months ago
How Low Will We See Tech Go? 5 min read