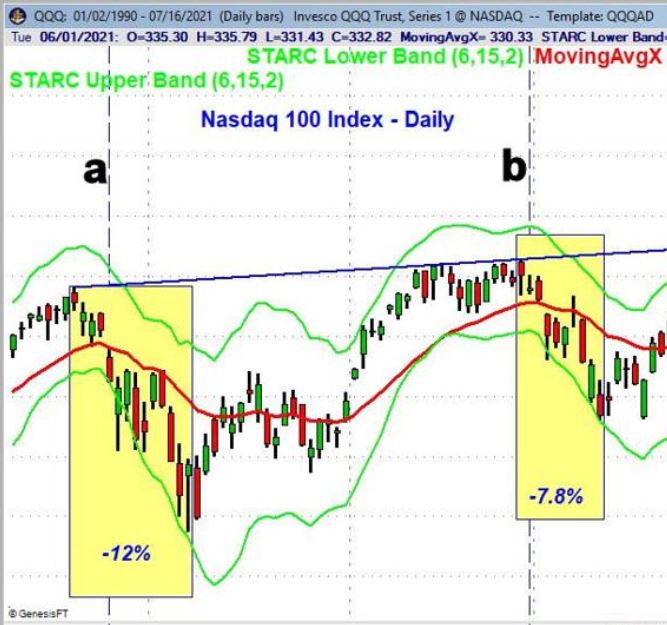 July 18, 2021: The stock market last week was not impressed by the start of the earnings season. The large financial stocks JPMorgan Chase (JPM), Goldman Sachs (GS), and Citigroup (C) all beat their earnings and revenues forecasts, but their stocks were down 2.5%, 1.9% and 2.3% respectively for the week. This action was consistent with the technical outlook, as stock market risk had increased just last week.

The hourly chart of the S&P 500 from AdvisorsPerspectives.com does not paint a pretty picture of the market action. It is especially interesting that the higher openings Wednesday and Friday were hit with selling, which is a sign of weakness. For the week on the NYSE, there were 896 issues advancing and 2564 issues declining. The declining volume on the NYSE was twice the advancing volume.

The decline last week was again led by the iShares Russell 2000 (IWM), which dropped 5.1% while the Dow Jones Transportation Average was down 2.4%. The 1% decline in the S&P 500 was matched by the Nasdaq 100 Index.

The star performer for the week was the Dow Utility Average, which was up 2.3%. The volume analysis for the related Utilities Sector Select (XLU) had turned positive with the close on July 9 (see chart). For the week, the Consumer Staples Sector (XLP) and Real Estate Sector (XLRE) were also higher. The Energy Sector (XLE) was the big loser, down 7.9% for the week.

Given the price action, it is not surprising that the technical outlook deteriorated further last week. The decline has not been serious enough in my opinion to confirm that a correction is currently underway, as another bounce is possible first.

This is because the daily top formations have not yet been fully completed in the market-leading Spyder Trust (SPY) and the Invesco QQQ Trust (QQQ). The Spyder Trust (SPY) had a high last week of $437.92, which was very close to the monthly R2 pivot resistance at $437.93.

The fact that this level was reached before SPY turned lower is action consistent with the formation of a top. The weekly starc+ band is at $446.06. The rising 20-week exponential moving average (EMA) is good support at $414.04, which is 4% below Friday’s close. There is much stronger support in the $400-$403 area (line a).

The weekly S&P 500 Advance/Decline line peaked two weeks ago, but is still well above its rising weighted moving average (WMA) and the support (line b). The A/D line does not always drop below its WMA on a correction, but in this case it would not be surprising.

The Nasdaq 100 Advance/Decline has formed lower highs (line g), as QQQ has formed higher highs, thereby forming a negative divergence. The A/D line dropped below its most recent low at the end of the week (line d), which confirms the divergence. A rebound back to its WMA is possible before the support (line f) is broken.

In February, the QQQ had a fourteen-day correction that amounted to a decline of 12% from high to low (line a). A few days after the high, the Nasdaq 100 A/D line dropped below its WMA, which was consistent with a correction.

There was another ten-day decline in April, as the QQQ lost 7.8%. The Nasdaq 100 A/D line dropped below its WMA one day after the high (line b), and also violated its uptrend (line e). The daily starc- band was again tested on this decline. The two market declines clearly demoralized many tech investors, leading many to ignore the bullish signals in early June.

The average length of the correction was 56 days, but eight lasted less than 40 trading days. Corrections are usually understood to be declines of 20% or less, so the 33.9% drop from the Spring of 2020 is not included. Bull market corrections usually result in a negative change in the sentiment of most investors and traders.

Many of the market corrections I have studied over the past fifty years have had a similar structure, and the daily starc- bands can be very helpful in analyzing them correctly. Typically, the first heavy wave of selling will take the market averages below their starc- bands, which will be accompanied by an increase in put-buying. The rally from this low will often last a bit longer and go high enough to convince those late put-buyers to close out their positions.

Ultimately, the positive monthly and weekly A/D analyses indicate that a further correction in the coming weeks will ultimately provide a good buying opportunity for both growth and value stocks or ETFs. The technical deterioration at the start of the week was a good reason for traders to tighten stops, while investors should get an opportunity to add to positions at lower levels.