The stock market rewarded both the bulls and the bears last week but in different ways as while the tech holders endured more pain those in financial stocks were rewarded. The action confounded many in the financial TV media as from one day to the next they did not know whether to run bullish or bearish stories. 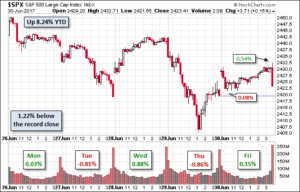 This chart from dshorts excellent site does a nice job of displaying what last week was like. Investors seem to be getting more nervous they are also confused. In the latest AAII survey the bullish % dropped 2.9% to 29.7% while the bearish % also fell 2.1% to 26.9%. The neutral camp has risen to 43.3% suggesting more investors have moved to the sidelines. This means once the correction in tech is over many will be left on the sidelines. The CNN Fear & Greed Index is still neutral.

Last week Mike Wilson, Morgan Stanley chief US equity strategist discussed on CNBC his year-end S&P 500 target of 2700. As an investor should this make you nervous?

In last December’s column “The Week Ahead: How High Can The Market Forecasts Go?”. I discussed the 2017 year –end forecast by the top Wall Street investment banks. Each year I point out that I think this is a pointless exercise which I am sure is not popular amongst the strategists. Those who pick stocks for the year are looking at fundamentals as any technical analyst will tell you things can change drastically in 12 months. 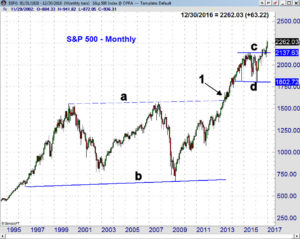 I only discuss price targets that are derived from technical methods and as I mentioned then the “trading range in the S&P 500, lines c and d, has upside targets at 2456. This is 8.5% above Friday's close which is not an unreasonable target in 2017. The longer-term monthly chart shows the eighteen year trading range (lines a and b) that was completed in May 2013, point 1. The target from this formation is at 2486.” The high so far in 2017 has been 2453.82.

On December 7th 2016 the high end of the WSJ forecasts was 2400 and the S&P 500 was trading at 2241. As we end the first half of the year it seems as though the forecasts need some work. So far there are not many who are as bullish as Mr. Wilson. A June survey of many firms had an average year-end target of 2442.

If a larger number of analysts start to raise their targets I would become more concerned as typically this occurs before a correction. Some may remember in early 2016 when crude oil dropped below $40 many lowered their price targets to the $20-$25 area. As it turned out crude oil rallied for the rest of the year to close $20 higher. 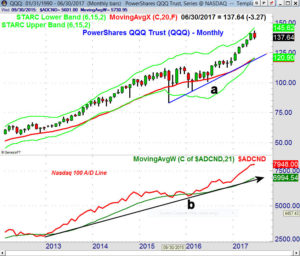 Looking at the monthly chart the upper boundary of the trading channel (line a) and the starc+ bands are now at 2531 and a move to 2700 would be a gain of 11%. This is not out of the question but it is too early to think it is a reasonable upside target. There would need to be much more bullishness from the individual investors to take prices this high. 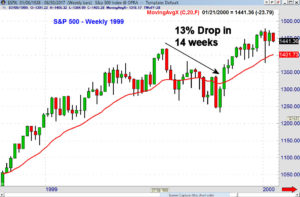 As I discuss in the market Wrap Section there are no signs yet of an intermediate term correction but it is also not the time to be complacent. Investors should concentrate on determining whether the economy is expanding or contracting as well as whether the S&P 500 is in a bull or bear market.

As long as the economy is expanding and stocks are in a bull market investors should be in the stock market. Since the spring of 2009 my stock market outlook has remained positive as my unique analysis of the advance/decline data has shown no negative signs as it did in the summer of 2007. During the same period my analysis of the economy has never indicated that we have dropped back into a recession.

There was some slippage in the Fed regional surveys last week while Friday’s Chicago PMI Index came in at 65.7 much better than the consensus estimate of 58.2. The data on the consumer was positive as both the Consumer Confidence and Consumer Sentiment improved in May as both beat estimates.

On the housing front the Pending Home Sales fell 0.8% for the third monthly decline in a row while the S&P Corelogic Case-Shiller Housing Price Index at 0.3% was not as strong as expected. Last Thursday’s final 1st quarter GDP was stronger than expected at 1.4% but it is the 2nd quarter data that will be more important. The advance reading will be released on July 28th. 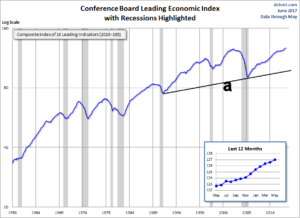 Over a week ago the Conference Board’s Leading Economic Index (LEI) was released as it increased to 127. The 0.3% gain was better than expected. The LEI has a good record of topping out many months before a recession and the short term chart shows a strong uptrend over the past year. It would take several months of weaker numbers before a top was in place. 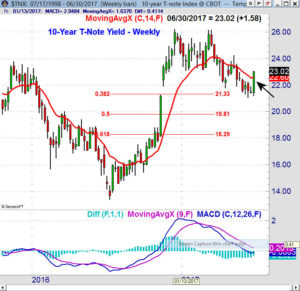 Bond yields surged last week as bonds plunged based on the concern that global monetary stimulus was ending. This pushed the dollar lower and this contributed to the selloff in the tech shares. The weekly chart of the 10-Year T-Note yield shows that it triggered a weekly doji buy signal consistent with higher yields.

The decline in yields from the late 2016 high took yields just below the 38.2% support at 2.133%. Yields closed back above the 20 week EMA with next resistance in the 2.400% area. The weekly MACD and MACD-His are both still negative but are trying to bottom out. The daily momentum indicators have turned positive. 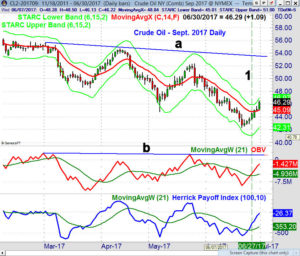 The September Crude oil contract closed up 7% last week but that was not to change the bearish outlook of many traders. Several after the close on CNBC are looking for prices to go even lower. The daily studies on crude turned positive on Tuesday (line 1) as the OBV moved back above its WMA and is not far below the resistance at line b. The HPI also looks positive as it has moved back above its WMA but is still below zero. There is next resistance at 448 with major in the $53-$54 area. The weekly analysis is still negative.

For the week the Dow and S&P had small losses while the Dow Transports and financial stocks gained 1.8%. The Nasdaq 100 dropped 2.54% and the Dow Utilities did a bit worse. The NYSE A/D numbers were slightly positive and the weekly NYSE A/D line made a new high though the NYSE Composite did form a doji confirming the indecision.

The monthly chart of the Powershares QQQ Trust (QQQ) shows that it came close to its monthly starc+ band in June which stands at $145.62 for July. Despite the decline late in the month is has been able to hold above the prior month’s low at $135.50. The July monthly pivot support is a bit lower at $134.73.

The monthly Nasdaq 100 A/D line made a new high in June and is still well above its rising WMA and support at line b. The weekly A/D made its new high at the start of June and it would take a drop below the June 16th low for it to start a new downtrend. The daily Nasdaq 100 A/D line made a new high last week and closed above its WMA. This is an encouraging sign but a further rally this week is needed to keep it positive.

The selling in the tech sector cannot be discounted and there are no strong signs that many of the high flying stocks have bottomed. In last week’s article “Why I Sold Micron Technology Before Earnings” I discussed the reasons I advised taking profits in Micron Technology (MU) on Monday at $32.45. This was not and any opinion I had about Thursday’s earnings report.

Even though their earnings were better than expected MU closed down 5.1% Friday at $29.86 with triple the average volume. This could have been a selling climax but it may take the earnings season to complete the corrections in many of the big tech names. 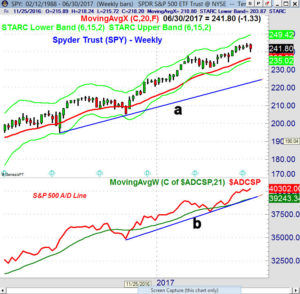 The iShares Russell 2000 (IWM) was up slightly last week and formed a doji with a low of $139.65. The weekly Russell A/D line has turned up and is now in a short term uptrend. The monthly A/D line made a marginal new high in June which is a good sign. The weekly relative performance is above its WMA and will complete a bottom with a strong close this week.

The weekly A/D line on the SPDR Dow Industrials (DIA) looks the strongest as it shows a bullish zig-zag formation. The daily A/D line is in a clear uptrend with the weekly starc+ band at $218.52.

What to do? Last week’s action suggests many investors are once again assuming higher rates are automatically bad for stocks. As I pointed out over a year ago ” a Deutsche Bank study on rate hike cycles doing back to 1957 revealed that on average it takes 41 months from beginning of a rate-hike cycle before a recession starts. When rates were raised on June 30, 2004 the stock market continued higher until October 2007 and the recession started in December.

I hope many of you have had a good past year in the stock market as in April 2016 I was recommending a dollar cost averaging program in a well-diversified ETF and was looking for stocks to finish 2016 on a strong note.

Many of the sector ETFs like health care, industrials and financials had a great week as Viper ETFs investors and traders have been well rewarded. I think the increase in volatility may make the market more challenging in the next few months.

This means that controlling the risk by focusing on both the entry and the stops will be more important. A more broad based correction, when it occurs, should present the next good buying opportunity.

The overseas markets are likely to present the best opportunities. I will be sending out the new QPivot numbers for the largest overseas and country funds to Viper ETF Report subscribers this week.

The Viper Hot Stock portfolio will becoming more balanced between short and long positions as there were a greater number of new sell signal last week.

If you are interested in specific buy and sell advice, you might consider a one-month investment of just $34.95 for either the Viper ETF or Viper Hot Stocks service. Both services include two in-depth reports per week and subscriptions can be cancelled online at any time.

If you are interested in learning more about my trading strategies, you can download a copy of my eBook and also be added to the list for the free Viper Report emails. Market commentary and technical tips are sent out several time a week. They are often also posted on the Viper Report Facebook page.