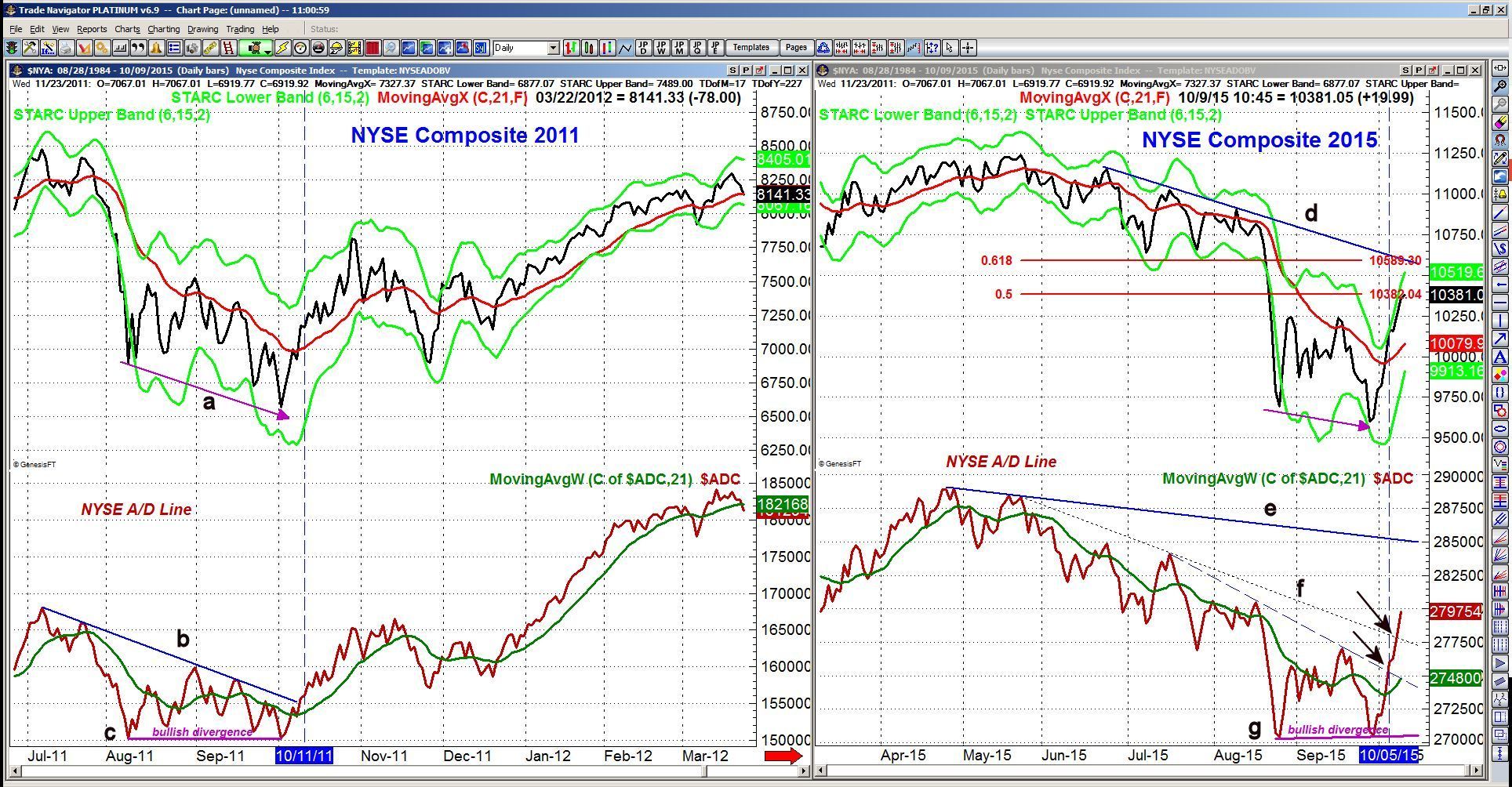 There were signs after the close on Friday October 2nd that the market's upside reversal was important. The strong action last week confirmed that the stock market had completed a short term bottom. Fortunately many on Wall Street do not seem convinced as many were looking for the rally to fail before the end of the week.

Even the increased global tensions with Russia and the Republican meltdown in the House did not seem to deter the buyers. In August I wondered whether the market's correction was going to look more like 2011 or 2012?

In 2011, the NYSE started a sharp decline in July and made the initial low in early August as the debate over raising the debt ceiling resulted in a downgrade of US debt. The failure to act and then the last minute deal surprised the global markets as they concluded that Congress was not competent. The subsequent decline in consumer confidence clearly delayed the economic recovery. 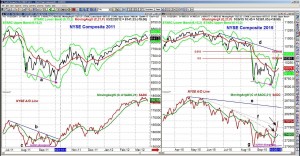 The NYSE Composite made a closing low on Monday October 3, 2011 (line a) as many in September had predicted the start of a new recession. The following day stocks were sharply lower in early trading but then reversed to close the day higher.

However, the NYSE A/D line formed higher lows, line c. This bullish divergence therefore suggested that the market was bottoming. The break through the downtrend in the A/D (line b) confirmed the bullish divergence.

By the close on October 28th the NYSE had gained 18.9% from the closing low. The initial rally was followed by a 11.7% correction into a low on Black Friday. The market was led higher by the A/D line which was a bullish sign and the Spyder Trust (SPY) gained 16% in 2012.

In 2015, the NYSE Composite made a new closing low on Monday September 28th but the NYSE A/D line formed slightly higher lows, line g. Stocks were hit with more selling on Friday Oct. 2nd before the market reversed to the upside as the Dow went from down 258 points to up 200.

Many have warned that October may be another tough month for investors but since 1990 the S&P 500 has closed positive seventeen times and was lower just eight times. The average October return for the S&P 500 during this period has been 1.38%.

It is even more interesting when you look at the performance in October after the S&P 500 was down in September. 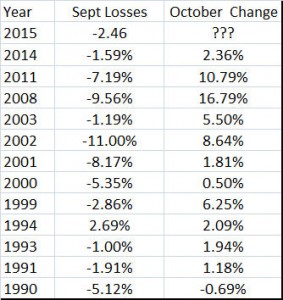 In 2011, the 7.19% loss in September was followed by a 10.78% gain in October. A similar result this year is not out of the question as a further rally will force many to cover their short positions.

The latest FOMC minutes supported my view that deflation is a bigger concern than inflation. One of the reasons why the Fed did not raise rates was because inflation has been below its target level of 2% for the past three years.

Also a concern for Fed members is the recent softness in the job market as they are not sure whether it is a sign of actual softening in the economy. Many of the Fed Presidents have spoken out recently they are looking for rates to be raised before year end. Three Fed Presidents will be speaking on Columbus Day.

Another concern for the markets is the latest IMF report which estimated that over-borrowing by developed countries could be over $3 trillion dollars. They also have concluded that as much as 25% of China's corporate debt is at risk of default. 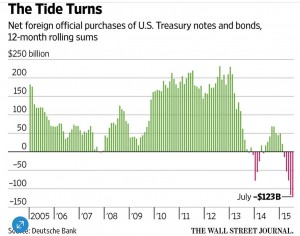 The IMF is also concerned that forced sale of assets will mean what they call "fire-sale prices". The WSJ article last Wednesday pointed out that China, as well as Russia, Taiwan and even Norway are selling US debt. In fact net sales in the year ending July hit $123 billion. This compares with a net purchase of $27 billion the previous year.

It was a light week for economic news as the ISM Non-Manufacturing Index last Monday dropped to 56.9. Still a solid reading. This was consistent with the PMI Services Index reading.

The banks are closed for Columbus Day but the stock markets is open though trading may be light. On Tuesday we get the NFIB Small Business Optimism Index which I compared last week to the Consumer Confidence Index.

On Wednesday we get the latest reading on Retail Sales along with the Producer Price Index and Business Inventories. The Consumer Price Index will be released Thursday as will the Empire State Manufacturing Survey and the Philadelphia Fed Business Outlook Survey.

On Friday we get Industrial Production and the mid-month reading on Consumer Sentiment from the University of Michigan.

This week will be important for the bond market as yields rebounded last week to resistance in the 2.10% area. A daily close back below the 1.989% level will signal a further decline in yields which does look likely. 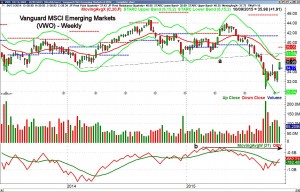 The big headlines a few weeks ago about the panic selling in the emerging markets appears to have created at least a short term bottom. The Vanguard MSCI Emerging Markets ETF (VWO) was strong last week and closed up over 5.7% for the week. VWO has closed well above the quarterly pivot at $34.77 which is a positive trend signal.

The 20 week EMA is at $36.47 with the weekly starc+ band as well as chart resistance, line a, in the $37.69 area. The quarterly projected pivot resistance is at $39.05. There is short term support now at $34.07 and the rising 20 day EMA. The volume has been high as VWO was bottoming and the on-balance volume (OBV) is back above its WMA. 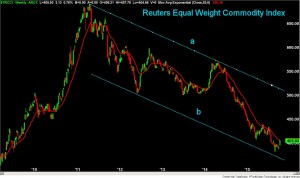 The commodity markets came back to life last week as the Reuters Equal Weight Commodity Index closed up 3.5% for the week. It is still down over 41% from the 2011 high. The weekly chart shows a well defined downward trading channel, lines a and b. There are no signs yet of a major bottom.

Crude oil also had a good week as the December contract closed just above $50 which was the highest close in twelve weeks. The quarterly projected pivot resistance stands at $57.47 with additional resistance in the $60 area. 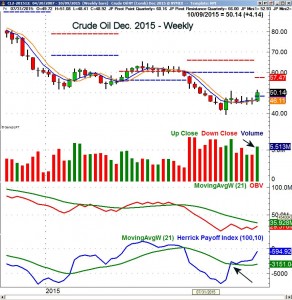 The weekly OBV is still below its WMA while the daily OBV is positive. The HPI, which uses volume, open interest and prices has risen further but is still slightly below the zero line. The WMA has also turned up and the daily HPI does signal positive money flow.

The energy stocks had a good week though the rally appears to have stalled on Friday. This suggests we may see a short term pullback this week. The SPDR S&P Oil & Gas Exploration (XOP) now has short term support in the $36.37-$37.04 area. The daily OBV is positive while the weekly studies still need a further rally. 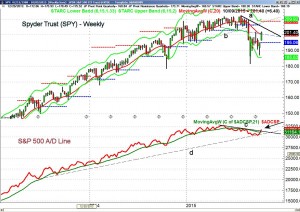 The weekly S&P 500 A/D line has moved back above its WMA and the downtrend, line c. This is a positive sign for the intermediate term. The A/D line has also turned up from the long term support at line d. 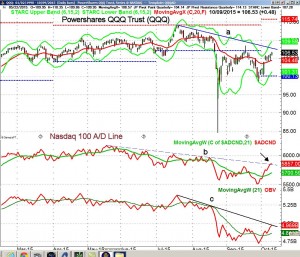 The Nasdaq 100 has broken slightly above the bearish divergence resistance (line b) that goes back to the May highs. The A/D line is well above its WMA which has now turned higher. The daily OBV is testing its resistance at line c. The weekly OBV (not shown) has broken the downtrend from the 2014 highs.

The technical outlook for the iShares Russell 2000 (IWM) does not look as strong as the SPY, QQQ or the SPDR Dow Industrials (DIA). All of these ETFs, except the QQQ, formed daily dojis on Friday which is a sign of indecision.

The stock market performance last week fulfilled the requirements I laid out last week when I said " The stock market now needs to continue higher to confirm the positive divergences as the A/D numbers will be quite important. Two consecutive higher closes should start to worry the market bears as most media analysts are quite negative on the stock market."

The improvement in the daily and weekly technical outlook suggests that the stock market has likely resumed its intermediate term uptrend. These readings do not suggest that this is just a oversold bounce that is part of the topping process. Nevertheless the rally should be monitored closely in the coming weeks for any hints of a rally failure.

I will be looking for a short term pullback in the next week to buy some of the ETFs that are outperforming the S&P 500. As we enter earnings season, these ETFs allow better protection against an earning's shock in any individual stock. Keep in touch with my intra-day market outlook on Twitter and StockTwits.