The Week Ahead: The Good And Bad News For Investors

The Week Ahead: The Good And Bad News For Investors

The stellar earnings of last week from some of the largest companies could not move the market significantly higher as the major averages were mostly lower. Only the Dow Utilities were able to close the week with significant gains, as it was up 2.5%. 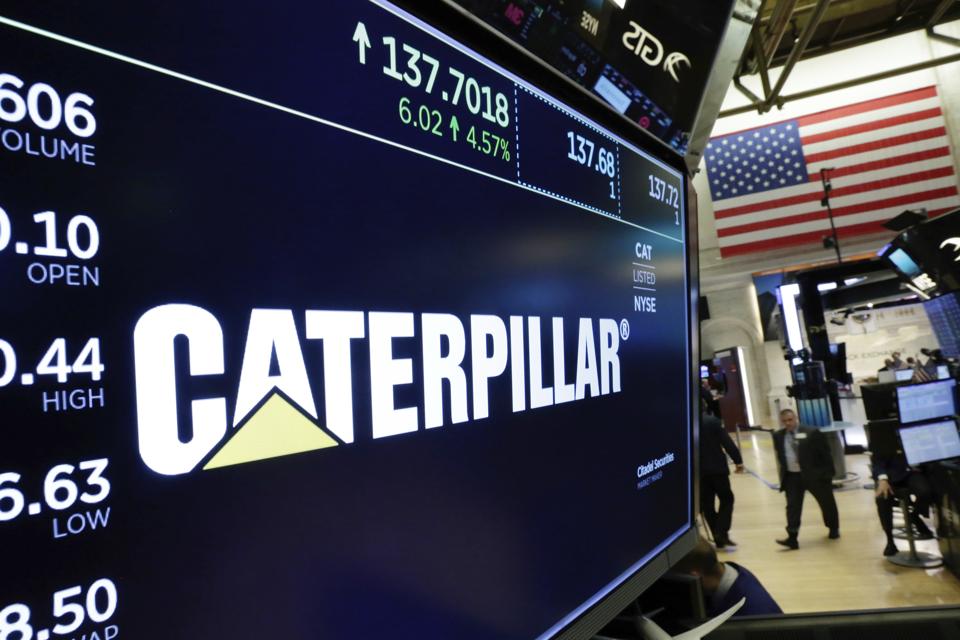 The stock market’s attempt to rally early in the week was derailed by the comments from Caterpillar’s Chief Financial Officer Brad Halverson that the company’s first-quarter profit “will be the high-water mark for the year” because of expected increases in investment later in 2018.

Caterpillar’s stock went from being up over $7 per share as it reached a high of $161.10 before plunging to close at $144.44. It dragged the entire market lower as many of the major averages closed down 2%. The daily chart shows that CAT had broken its downtrend, line a, prior to earnings as it had slightly violated the 38.2% support at $139.89. The massive reversal has taken the price back within its trading range.

Looking at CAT’s decline in terms of the rally from the March low at $87.58, it looks like a typical market correction, but still those who bought in January are likely to have trouble staying with their long positions. There are still no signs that CAT has completed a major top as the 200 day MA is still rising strongly.

The drop in CAT stock has clearly changed the bullish outlook of many towards the company. Corrections like that of Caterpillar are classified as a continuation pattern which is a pause in the prior trend. These patterns have an important role in both bull and bear markets.

The current decline has lasted 13 weeks and time does play an important role in changing the sentiment. The longer the market corrects, the more investors get worried and turn more negative on the market or on individual stocks.

The current market correction has been highlighted by a number of vicious declines and this has been enough to even change the opinion of some seasoned professionals. One well known expert is still expecting the S&P 500 to reach 2850 this year but now thinks it could first drop another 7.5% to 2350.

In the latest American Association of Individual Investors (AAII) survey 36.9% are now bullish which is up from 26.1% on April 12, but still well below the January 4 high of 59.8%. There are currently 37.5% in the neutral camp up significantly from the January 4 reading of 24.7%.

This is a sign that investors have become more cautious as they have moved into the neutral camp. The bullish percent could still go quite a bit lower and is well above the extreme low readings in the 18-22% area that have been seen at major lows like in early 2016.

Continuation patterns or pauses also form during market downtrends. By early 2008, the stock market had dropped well below the October 2007 high. At a conference in early February 2008, the majority of investment experts interviewed were negative on the market. The bullish percent had dropped from a peak of 54.6% in October 2007 to a low of 19.6% by early January.

The daily chart shows that the S&P 500 rebounded in February 2008, but was still in its solid downtrend. The brief bounce was followed by another round of selling as the S&P 500 made new correction lows in March. The S&P 500 then turned higher and by the middle of April it was in a clear uptrend, line b.

As the rally continued into May many of the same advisors who were very negative in February had turned less pessimistic on the stock market by the May conference. On May 19, 2007, the S&P spiked to a high of 1440.24, which was just above the resistance at line a. The S&P 500 then dropped sharply for the next two days and then violated the support from the March lows (line b).

In the AAII survey on May 1, 2008, the bullish percent peaked at 53.3%, as it had made a secondary low of 20.4% on March 13 (see chart). This was a week before the S&P made its correction low. The rally failure in May below the key resistance and the sharp reversal had all the signs of a bear market rally as I discussed in my June 8, 2008 article.

In addition to the comments regarding Caterpillar (CAT), the move in the 10-Year T-Note Yield above 3% also made investors nervous. The weekly chart shows that yields did break out of their flag formation but ended the week on the lows. If this was a legitimate upside breakout, then any pullback over the next week or two should be followed by a further rally.

The weekly and daily MACD analysis is positive but neither has confirmed the breakout. The weekly MACD has formed lower highs, line a, and is just barely positive as of last week. As I have pointed out many times in the past (see chart from February 2) the early stages of a rate rising environment are positive not negative for stocks.

This week, the bond market will have plenty to digest with the Chicago PMI and ISM Manufacturing Index early in the week and the FOMC meeting begins on Tuesday. On Thursday, the ISM Non-Manufacturing Index is released, followed by the monthly jobs report on Friday. A weaker than expected jobs report (190,000) could take some pressure off the Fed to raise rates in June.

Of the four major averages that I follow, all have formed trading ranges which based on the technical readings are most likely continuation patterns. The NYSE Composite (NYA) continues to look the best based on the advance/decline analysis. The monthly chart shows that with one day left in the month it is up 1.1% in April. The 20 month EMA is at 11,980 which is just below the February lows. The major support from the 2015 high, line a, is at 11,254 which is 10.6% below the Friday close.

The monthly advance/decline line is still well above its rising WMA which is a positive sign. It last turned positive in the spring of 2016 when it confirmed that the market’s major uptrend had resumed. It is well above the long-term support that goes back to the 2011 lows.

The weekly S&P 500 A/D line improved slightly last week and is still above its flat WMA. The daily A/D line dropped below its WMA early last week but closed above it on Friday. A decline in the A/D line below the late March lows would be negative.

The A/D lines and chart look the weakest on the PowerShares QQQ Trust (QQQ). The QQQ was able to close the week slightly above its QPivot at $161.82 while the SPY is still below the QPivot at $267.57.  Both the weekly and daily A/D lines are still below their WMA with support to watch now at Wednesday’s doji low of $156.47 as a doji buy was triggered on Thursday.

So the bad news is that there are no strong signs yet that the market's correction is over and that investors will still have to be patient. The good news is that the technical evidence still favors an upward resolution of the recent trading ranges and a resumption of the stock market’s bullish trend.

The possibility of a break to the downside cannot be ignored and that is why stops are so important.  Accumulating some of the sector ETFs that are expected to be market leaders with reasonable stops is still the favored strategy. Until all the A/D lines turn positive, I would not be an aggressive buyer and would stay no more than 40-50% invested in equities.

During the earnings season, I am a careful buyer of stocks and several positions were sold at the start of the week as they were scheduled to report their earnings. This allowed us to miss Tuesday’s sharp drop. Now that the earnings season is winding down, there are a number of stocks that are looking attractive.  My weekend scan revealed that sixty-five S&P 500 stocks had generated new weekly buy signals.

Both the Viper ETF and Viper Hot Stocks reports are sent our twice a week. They include in-depth market commentary and specific recommendations. Each report is only $34.95 per month.