How To Use Inverse ETFs For Timing and Trend Confirmation

How To Use Inverse ETFs For Timing and Trend Confirmation

Stocks in the Euro zone are higher in early trading with the Dax Index up over 1% while the Stoxx Europe 600 is up almost 0.50%. The S&P futures are up slightly in early trading but did form a doji in Tuesday's session. A close below 2028.75 would be a short term negative.

The A/D ratios swung between positive and negative during Tuesday session but closed a bit negative. A more pronounced divergence has been formed in the McClellan oscillator but it has not been confirmed yet. This could happen with 2-1 negative A/D ratios in the next few days.

In my analysis of the commodity ETFs for my Viper ETF reports I look at not only the underlying commodity futures but also the leading ETFs as well as the inverse ETFs. It has been my view for a few weeks that the correction in gold and the gold miners was not complete. 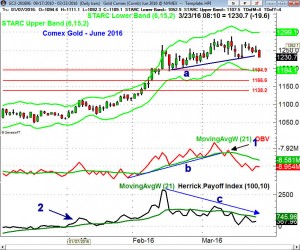 The daily chart of the Comex Gold Futures shows that it is down almost $20 in overnight trading and may violate the chart support at line a.

My negative view on the gold futures was based in part on the drop below the key OBV support (line a) on March 9th that was followed by a weak rebound above its WMA, point 1. The OBV has since been dropping sharply though prices have stayed in their trading range until today.

The Herrick Payoff Index (HPI) uses volume, open interest and the price action which makes it a unique technical study. The HPI completed its bottom formation in early January as it broke through resistance, point 2.

The HPI peaked at the mid-February highs and has since formed lower highs, line c. It has been below its WMA since March 9th. The weekly HPI still looks strong which is a sign a further correction should eventually be a buying opportunity.

When considering the purchase of an ETF like the Spyder Trust (SPY) or the SPDR Gold Trust (GLD) I also look at the corresponding inverse ETFs like the ProShares UltraShort S&P (SDS) and the DB Gold Double Short ETN (DZZ). 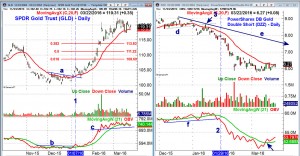 The daily chart of the SPDR Gold Trust (GLD) shows that it completed a bottom formation on January 7th (line 1) as the OBV moved sharply above the resistance at line b.

- After gapping higher for two days GLD retested the breakout level, line a, and dropped slightly below its 20 day EMA.
- The OBV held firm at its WMA before it again turned higher.
- The rally in GLD appears to have topped out at $122.37 and now has key support at $117.36.
- A break below this level will make the 38.2% Fibonacci support at $113.83 the next downside target.
- The more important 50% support is at $111.22 and a drop between these support levels would not be surprising.
- The daily OBV has not yet completed a top as it needs to drop below the support at line c, to turn negative.

The PowerShares DB Gold Double Short ETN (DZZ) is an inverse ETF that seeks to provide twice the inverse of daily movements in the Deutsche Bank Liquid Commodity Index-Optimum Yield Gold Excess Return. It has an average volume of 400K.

- DZZ peaked at $12.08 in the middle of December and had a low on March 4th of $5.79.
- As GLD was rallying in early January DZZ broke key support at line d and then rallied back to this new resistance (point 3) before the selling picked up and DZZ dropped more sharply.
- The OBV did not break its important support, line e, until January 29th (line 2) as the action in DZZ confirmed a stronger new uptrend in GLD.
- The OBV moved back above its WMA on March 14th and has continued to edge higher. This suggests that a bottom is in place for DZZ.
- On a close above $6.60 a rally to the $7.05-$7.44 area is likely.

What to do? Gold is set to gap higher along with DZZ as GLD may break the key support at the mid-March lows. If it does a weak rebound is likely in the next week before gold drops even further.

This three pronged approach to trading and investing in the commodity ETFs I believe can give one a special insight that can often be quite useful in trading these volatile ETFs. This approach is used in recommendations for Viper ETF clients who will also be receiving a historical study of this approach in the next few weeks.