As the selling picked up late Friday the major averages were unable to hold their gains but it was even worse week for many individual stocks. Even before Friday's market decline the drug delivery, steel & iron, non-metallic mining, home furnishing and department stores were already down over 7% for the week.

Not all stocks were lower as the multimedia software, generic drugs, computer systems and mail order stocks were all up 5% or more. Electronic Alerts (EA) led on the upside gaining over 20% and Monsanto (MON) also reported strong earnings and surged late in the week.

Of course the main focus was on the department stores with Sears (SHLD) down over 18% followed by a 17% drop on Macy's (M) and over a 15% decline in Kohl's (KSS). Nordstrom Inc. (JWN) also disappointed on earnings last Thursday as it was down over 13% on Friday . The technical review of two of these stocks as well as the SPDR S&P Retail ETF (XRT) last Tuesday (Retail Rout: Buy It or Not?) concluded that there was no reason to be long these stocks ahead of their earnings. 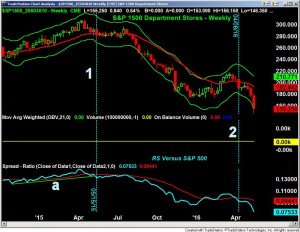 In selecting stock s or ETF the relative performance analysis plays a key role as it can keep you out of the weak stocks or industry groups and can help you avoid getting caught in downdrafts like what hit the department stores. The weekly chart of the S&P 1500 Department Store group turned negative over a year ago as the RS line, dropped below the support at line a. The sell signal on May 15th 2015 (line 1) was followed by a drop of over 35% by the end of the year.

The department stores tried to rally in early 2016 but by April 8th (line 2) the relative performance had broken support which was a sign that these stocks were again acting weaker than the S&P 500. This week's close below the weekly starc- band means these stocks could stabilize for a bit. The continued plunge in the RS line is negative for this industry group.

One of the strongest performers since the February low has been the Materials Sector Select (XLB) as it is 16.6% in the past three months versus an 11.2% gain in the Spyder Trust (SPY). On the daily chart my entry area has been highlighted. This was based on positive signals from the weekly /daily RS and OBV analysis in early February before the overall market had bottomed. 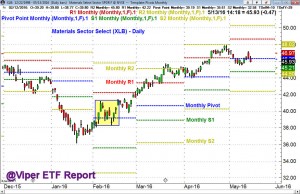 XLB dropped down to test the monthly pivot level on February 11th before it turned higher. The entry strategy was detailed in a Viper ETF Trading lesson that is sent out to all new clients. This chart shows that the monthly R2 resistance was hit in both March and April before XLB pulled back. The quarterly and monthly pivot levels play an integral role in my recommendations as values are included in the reports. We are still holding part of the original longs in XLB but continue to trail our stops.

The market has become more split over the past few weeks as the weakness in the tech sector has become more pronounced. The PowerShares QQQ Trust (QQQ) is now down over 5% YTD while the Spyder Trust is up 1.8%. The QQQ has been dropping for the past three weeks and now shows a well-established downtrend, line a. On a drop below the quarterly pivot at $104.74 it could decline to the weekly starc- band at $100.51. 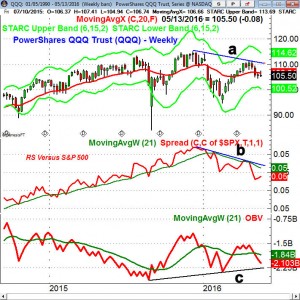 The QQQ has not been a favorite since the February lows based on the relative performance. The weekly RS line rallied up to resistance at line b, before turning lower. It is still in a clear downtrend, lower lows and lower highs, suggesting that is it likely to stay weaker than the S&P 500 for now.

The OBV is back below its WMA and needs to hold support at line c, to avoid a stronger sell signal. The Nasdaq 100 A/D line (not shown) has been in a downtrend since early in May and would have to close strongly above last week's high in order to signal that it is trying to bottom. 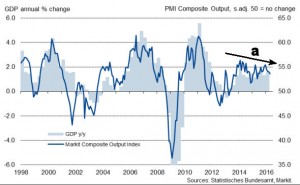 The news that the German GDP rose 0.7% in the first quarter caught most by surprise as it was double the 0.3% growth in the last quarter of 2015. It beat estimates as it was the strongest quarterly growth in two years. The PMI Composite from Markit shows a pattern of lower highs, line a, which supports the view of some economists that Germany's growth will not continue in the 2nd quarter. 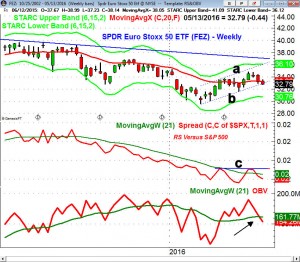 The news gave the German Dax a nice boost as it has rallied from the support that I identified in last week's column " The Bubble No One Is Discussing". However the action of the SPDR Euro Stoxx 50 ETF (FEZ), which includes all of the Euro zone blue chip stocks, has me more concerned.

The rally in FEZ from the February lows peaked three weeks ago and last week's close was just slightly below the weekly support at line b. The key support is now at $31.60 and the trading channel suggests it could drop back to the $30 level.

The weekly relative performance has dropped back below its WMA as it needed to move above the resistance at line c, to signal that it was starting to lead the S&P 500. That would have made me a buyer but the failure kept me on the sidelines. The OBV did act better on the rally but has now reversed and dropped below its WMA.

The weak action of the large cap Euro zone stocks further supports the view that the market is now vulnerable. This combined with my corrective outlook for the Nasdaq 100 and last week's break of daily support in the iShares Russell 2000 (IWM) provides strong evidence that the market has shifted into the corrective mode. For more details please see the Market Wrap section.

The key data last week came on Friday as the widely anticipated Retail Sales surprised many as it came in at 1.3% which was well above the consensus estimate of 0.9%. The 3.2% rise in auto sales was a plus as were apparel and restaurants which also had gains. If this is more than a one month phenomenon better numbers are needed again next month.

Business Inventories showed a nice increase of 0.4% while the mid-month reading from Consumer Sentiment at 95.8 was much better than most expected. As Econoday noted this was "the best reading since June last year".

The economic calendar is full this week starting with the Empire State Manufacturing Survey and the Housing Market Index on Monday. Then we have the Consumer Price Index, Housing Starts and Industrial Production on Tuesday.

On Wednesday we get the release of the latest FOMC minutes followed on Thursday by the Philadelphia Fed Business Survey, the Chicago Fed National Activity Index and Leading Indicators. The Existing Home Sales will be released on Friday. 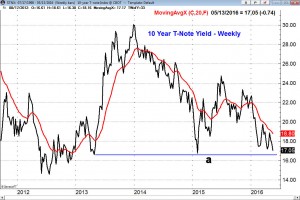 Yields dropped sharply late in the week as the yield on the 10-Year T-Note closed at 1.705%. This is just above the support, line a, in the 1.643-1.651% area that goes back to 2013. A decisive break of this support will get the market's attention and it is now looking more likely. It would now take a weekly close back above 1.900% to stabilize the short-term outlook.

Many hedge funds have expressed their bullish outlook on gold and the most recent data from the COT shows that the long side is very crowded. In fact in the managed money category, there are seven times more long positions than there are short positions. 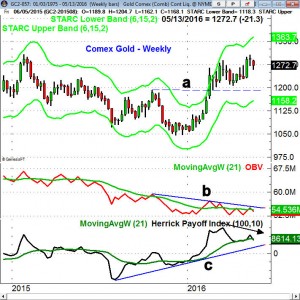 Gold futures were lower last week and despite the generally bullish forecasts for the metal, the weekly technical studies are not impressive. The first strong weekly chart support, line a, is now below $1200. A doji was formed two weeks ago but Friday's close just avoided a weekly sell signal.

The weekly technical studies are also not confirming the price action. The OBV has barely rallied with prices, line b, and has now dropped below its WMA. The HPI has also formed sharply lower highs (see arrow) and these bearish divergences do favor lower prices.

The dollar is also acting sold out as there has been some improvement since the weekly sell signal in early February. The daily technical studies could turn positive on a rally this week. This is likely to have an impact on both gold and crude oil where the technical studies remain positive.

The plunging retail stocks set the tone for the stock market last week as the Dow Transports were the weakest, down 3% on the week. The Dow industrials were down 1.1% while the S&P lost only 0.5%. The small cap Russell 2000 also lost 1% and the A/D ratios were 1.3 to 1 negative.

A week ago the market was set up to rally so Tuesday's sharp gains were not surprising. For several weeks I have been discussing the divergence between the Nasdaq 100 A/D line and the other key A/D lines. This meant the overall market needed to prove itself on the upside by continuing higher on Wednesday but instead it reversed to the downside.

Individual investors have been turning more cautious for the past few weeks and it looks like their cautious stance was warranted. The AAII bullish% dropped to 20.4% last week which is a level that one would normally see at a correction low. This suggests that if the market does drop further then the individual investors may start buying. 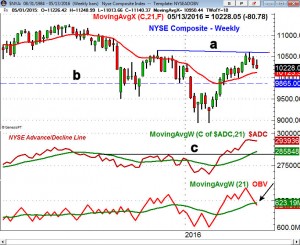 The NYSE Composite looks ready to drop below its 20 week EMA at 10,123 with next good support at 9865 which is 3.5% below Friday's close. The resistance at 10,600 is now well established. The NYSE A/D line is holding up well as it is still above its rising WMA and more important support at line c. The daily A/D line (not shown) has dropped back below its WMA but is still above the key support at the May lows. A drop below these lows will confirm a new downtrend. 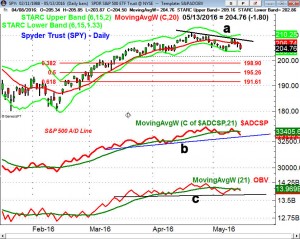 The S&P 500 A/D line has dropped below its WMA and the May lows confirming a new downtrend. A break of the A/D line support at line b, will confirm a deeper correction. The daily OBV did not rally much with prices last week and is now below its WMA. The more important OBV support stands at line c.

The advance/decline lines for the Dow Industrials, Russell 2000 and Nasdaq 100 have all dropped below their early May lows. This confirms new daily downtrends for both the Russell 2000 and Dow A/D lines as they have joined the Nasdaq 100 A/D line. In order to reverse these negative signals the A/D lines would have to move above their most recent highs.

What to do? The market's failure to rally more substantially last week has shifted the weight of the evidence into the corrective mode. As I commented last week "Two consecutive strong closes with A/D ratios that are better than 2-1 positive will suggest that the uptrend has resumed. If on the other hand the S&P 500 rally stalls at first resistance in the 2075-2083 area ... it will be a sign of weakness".

The S&P 500 made a high of 2084.97 before it turned lower. This means that we are likely to correct further as we head into June. A decline of 3-5% from current levels would not be surprising. It should not alter the positive intermediate term signals that were generated after the February lows.

The economic data actually improved last week and I will be watching the Leading Economic Indicators (LEI) on Thursday as it has a good record of topping out well before a recession. For investors the correction should present a good buying opportunity. Those who started a dollar cost averaging program a few weeks ago should stay with their plan.

Traders should take a more defensive position by tightening stops and taking light positions in an inverse ETF. For specific recommendation you might consider the Viper ETF Report which is sent out twice a week for just $34.95 per month and can be cancelled at any time.

Those who prefer trading high momentum stocks from either the long or short side might consider the Viper Hot Stocks Report.