The Week Ahead: Is There Blood In The Streets Yet?

The Week Ahead: Is There Blood In The Streets Yet?

There were many signs last week that the few remaining bullish advisors or investors were giving up on the stock market . Even the cautious economic comments from Fed Chair Janet Yellen did not inspire many new buyers. The week finished with a 2% rally in the S&P 500 but did that really change anything?

This famous comment is attributed in Baron Rothschild "The time to buy is when there's blood in the streets" and it is a staple of contrarian analysis. His buying after the Battle of Waterloo generated huge profits but many investors have endured serious losses over the years in their attempts to be contrarians.

According to AAII the bullish% dropped 8.3% in the latest survey to 19.2% bullish just above the 17.9% reading from mid-January . As I noted at the time this reading was the lowest since 2005 and last week's reading is just slightly more bullish than the 18.9% reading on March 5, 2009 as the bear market was ending.

The bearish % jumped 14% to 48.7% which is well above the long term average of 30.7% and matched the January 22nd reading. These are the highest reading since April 11th of 2013 when it hit 54.5%. As I have noted many times in past articles extremes in sentiment often occur well before an important market turn and the sentiment data does a better job of identify market lows than market tops.

In last week's trading the Dow Transports managed a nice gain of 1.5% while the NYSE Composite was down 1.7% for the week. The battered down Nasdaq Composite lost 0.60% The market internals were strong Friday as advances led the declining stocks by a 3.8 to 1 margin but for the week the market internals were decidedly negative as 2476 stocks declined with only 728 advancing. 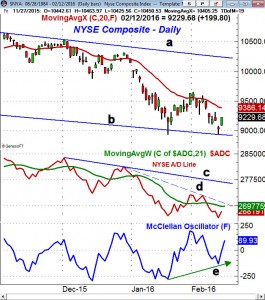 Therefore the weekly A/D lines are still declining even though the daily studies do show some improvement . The lower trend line support on the NYSE composite , line b, was tested again Thursday. The weekly low at 9089 came very close to the monthly pivot support at 9032. A solid close back above the 20 day EMA at 9386 would be the first step in reversing the downward price trend.

The NYSE daily A/D line as well as the Nasdaq 100 and Russell 2000 A/D lines made a marginal new low on Thursday so no positive divergences were formed. The S&P 500 and Dow Industrials A/D lines did not make new lows, forming bullish divergences which now need to be confirmed.

The NYSE A/D line needs to move above its WMA and the downtrend, line d, to signal a stronger rally. If the longer term resistance at line c is overcome it would be signs of an intermediate term bottom. The McClellan oscillator did form a strong positive divergence ( line e) but needs to close above the +160 level to signal an upside breakout. 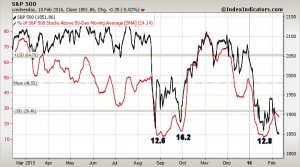 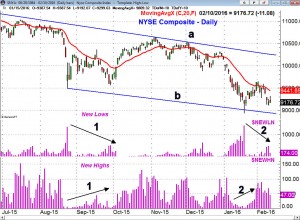 Last week I Tweeted two charts from the Viper ETF Report that support the view that the market is in the process of forming an intermediate term low. As I commented Thursday "The 5-day MA of the S&P 500 stocks above their 50 day MAs as I discussed on Monday also suggests the market is sold out. The 5-day MA bottomed on August 27th at 12.6% but was only at 16.2% on September 28th. The 5-day MA had a January 19th low of 12.8% but closed at 24.1% on Wednesday. The % is likely to drop further before the end of the week and would look for it to turn up as the market bottoms" .It stopped declining as of Friday's close.

The number of NYSE stocks making new lows was 709 on Thursday as opposed to 1395 on January 20th (line 2). It dropped further to 139 on Friday. This divergence is similar to what formed in late September of 2015, line 1. The increasing number of new highs is also an encouraging sign. 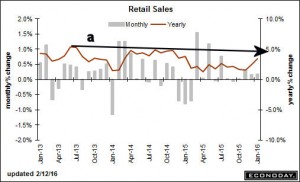 The economic data on Friday was better than expected as while Retail Sales rose just 0.2% as expected , general merchandise sales rose a healthy 0.8% in January. Building materials rose 6.9% year on year and e-commerce was up 8.7%. The yearly Retail Sales have turned up and a move through the resistance at line a would be a bullish sign for the economy. The mid-month reading on Consumer Sentiment was a respectable 90.7 which was not far below the four month average of 92.

The economic calendar is full this week with the Empire State Manufacturing Survey on Tuesday along with the Housing Market Index. Then Wednesday we get the Housing Starts, PPI and Industrial Production. The Philadelphia Fed Survey , Leading Indicators and FOMC minutes are out on Thursday followed by the Consumer Price Index on Friday.

What to do? if stocks manage to record several consecutive higher closes this week with good A/D numbers then a stronger rally is clearly underway. It should carry the major averages above the early February highs with the SPY and DIA look the best. This would mean a move above $194.58 in the Spyder Trust (SPY) with upside targets in the $196-$198 area. The DIA has a swing high at $165 which if overcome should push the DIA to the $167.50-$169 area. Teh A/D line analysis is weaker on the QQQ and IWM.

In Friday's article "Where Will Biotech Bottom?" I took a look at the long term charts of the iShares Nasdaq Biotechnology ETF (IBB) which has been lagging the overall market. It has some converging support levels that need to be watched and it formed a doji last week so this week's close could be important.

Editor's Note: If you are interested in specific investing and trading advice in the index and sector ETFs you might consider Tom's Viper ETF Report. It is just $34.95 per month and can be cancelled anytime on line.