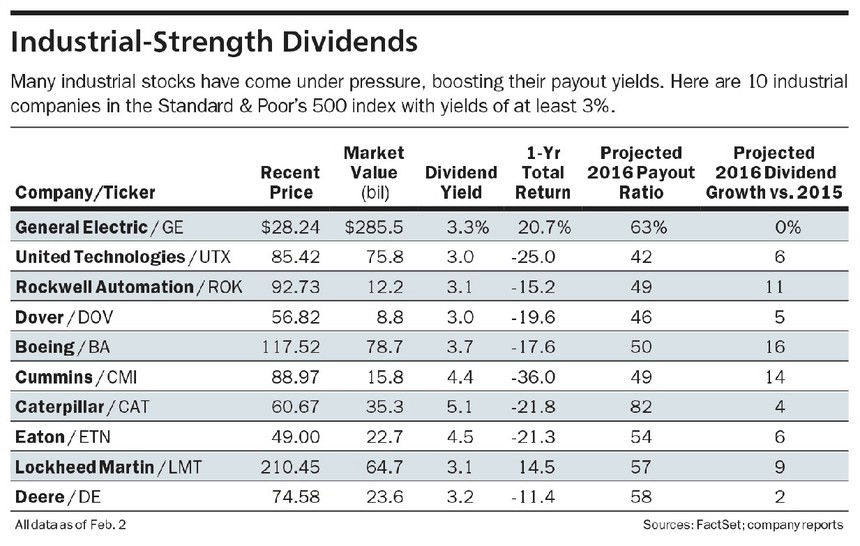 The stocks market's impressive gains Tuesday and 4-1 positive A/D ratios were consistent with the market's sold out status last week. The divergences in the NYSE High/Low analysis and the analysis of the S&P 500 stocks below their 50 day MAs that was discussed last week suggested the market was near a turning point.

The extremely low bullish sentiment and high degree of pessimism over the economy was also a sign as I noted last week that there was "blood in the streets" . This another reason for investors to be looking to buy, not sell. The bullish divergences in the S&P 500 and Dow Industrial A/D lines are closer to being confirmed after Tuesday's rally. A good day of A/D ratios on Wednesday could be enough to complete the bottom formations

Additional strength should push the Spyder Trust (SPY) above the $196 which make many of the market bears nervous. Many are just looking for a bear market rally so stocks need to prove themselves on the upside. The A/D lines (One Indicator Stock Traders Must Follow) must start leading prices higher in order to signal that an intermediate term low is in place. 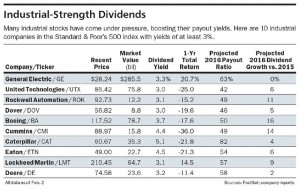 The Industrial sector has been outperforming the S&P this month and looks like a new market leader . In a February 8th Barron's article (Industrials Flex Payout Muscle) they examined ten industrial stocks with yields above 3% that based on their payout ratios could grow their dividends.

From the table one can see that all except General Electric (GE) have had dismal one year returns. This past poor performance makes them potentially attractive for new purchase but do any look attractive technically?

As I discussed in "Scanning Stocks For Winners & Losers" my method of finding the best stocks or ETFs focuses on running relative performance and on-balance-volume (OBV) analysis over multiple time frames. 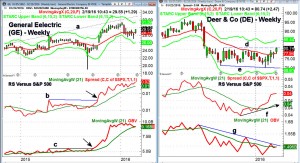 - GE formed a doji last week and is already trading well above the doji high of $28.70. This makes a bullish signal likely this week.
- Once above the January highs there is trend line resistance, line a, in the $33 area. The monthly starc+ band is at $34.40.
- There is short term support now at $28.63 and the 20 day EMA with further at $28.
- The weekly relative performance broke out to the upside in October and has continued to make new highs. The monthly RS analysis (not shown) is also positive .
- The weekly OBV broke out two weeks after the August low as resistance at line c, was overcome.
- The OBV is now trying to turn higher after testing its WMA.

- DE is currently trading above the resistance at $80.83 with the weekly starc+ band at $85.61.
- There is long term resistance from last summer in the $90 -$95 area.
- The 20 week EMA at $77.96 was tested this week with stronger support in the $75-$76 area.
- The weekly relative performance completed its bottom in early 2016 as it moved well above its flattening WMA.
- The monthly RS analysis (not shown) has moved above its WMA consistent with a market leader.
- The weekly OBV looks very close to flipping back above its WMA this week.
- A move in the OBV above its downtrend, line g, would be even more positive . 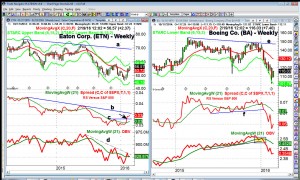 Eaton Corp. (ETN) is a diversified machinery company that has a current yield of over 4%. It formed a weekly doji the week ending January 22nd and triggered a high close doji buy signal the following week.

- The weekly starc+ band is at $59.94 with the downtrend, line a, in the $70 area.
- ETN opened strong Wednesday which creates initial support now in the $54-$54.50 area. The rising 20 day EMA is at $52.70.
- The weekly relative performance has completed its bottom formation as it surpassed resistance at line c, after moving above its WMA.
- There is longer term RS resistance at the downtrend, line b.
- The weekly OBV looks ready to hook back above its WMA this week.
- In order to signal a major bottom the OBV needs to break its downtrend, line d.
- The daily technical studies are positive.

Boeing Co. (BA) is one of the dividend stocks mentioned by Barron's and is a good example of a stock that looks weak technically. It is down over 22% in the past year. It had a high last November of $149.21 but dropped to a low of $102.10 last week and was well below the weekly starc- band.

- There is initial resistance in the $120-$124 area with the declining 20 week EMA at $130.14.
- The RS line dropped below its WMA at the start of the year.
- It then plunged below support, line f, in the middle of January confirming that it was acting weaker than the S&P 500.
- The RS line has continued to plunge and is now well below its declining WMA.
- The OBV had a weak rally at the start of the year as it just moved above its WMA for one week.
- The subsequent reversal in the OBV (see highlight) generated a sell signal and it then broke the support at line g.
- The weekly OBV is oversold as it is well below its WMA.
- The daily studies are negative but are now rebounding.

What to do? All three of the favored industrial stocks look positive based on the weekly as well as the monthly technical studies. They have all moved higher this week which increases the risk in chasing them at current levels.

GE, DE and ETN are likely to pull back to their rising 20 day EMAs in the next week or so which would allow for a better risk/reward entry point. The weakness in BA suggests that a further rally should be used for selling.

Stock traders who are interested in applying this type of analysis to the Nasdaq 100 and IBD top 50 stocks might try the Viper Hot Stocks it is only $34.95 per month.