The very strong market gains on Tuesday finally got the market's attention as the beaten down financial stocks were especially strong. The A/D ratios on the NYSE were over 4 to 1 and this further confirms the bullish signals from the A/D lines since the February 11th lows.

The upward acceleration has likely been strong enough to stop out many of the short positions. Quite a bit has changed in the past week. As I noted in last Tuesday's article "Don't Follow Those Bearish Traders" the heavy put buying and uniform bearishness of CNBC traders was in conflict with the technical readings.

A very strong weekly close is needed to cause further improvement in the stock market's intermediate term trend. Investors are still facing a "wall of worry" but the Week Ahead analysis revealed some cracks in this wall. So what's next? 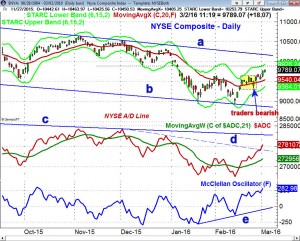 On the daily chart of the NYSE Composite I have highlighted the strong rally on February 16th which pushed the A/D line to another new high.

- This was a sign that a pullback would be well supported and the corrections was quite vicious.
- The next band of resistance is in the 9850-10,000 area with the daily downtrend at 10,150-250.
- The daily NYSE A/D line has broken its downtrend from the December highs, line d.
- It is also positive that the WMA of the A/D line is rising and shows no signs yet of topping out
- The longer term A/D resistance (line c) needs to be overcome to signal a change in the intermediate term trend.
- The McClelland oscillator formed a bullish divergence at the February 11th lows, line e.
- The Oscillator is still in a clear uptrend but is now at overbought levels.

What to do? The conventional wisdom is that the S&P 500 will hit the 2000 level and maybe go a bit further before the rally fails. My near term target for the Spyder Trust (SPY) is in the $199.50-$201.50 area. To signal that the stock market's rally is over the A/D lines will first have to top out but there are no signs of this yet.

The media has turned much more friendly on the stock market but as this is happening some of our favorite ETF picks like the SPDR Dow Industrials (DIA) and Materials Sector Select (XLB) are very close to my near term upside targets. This means we are likely to see a pullback in the near future.

I would not be chasing the market averages at current levels but there are some select stocks like Whole Foods (WFM) that are just completing weekly bottom formations. There should be a good setback in the next week or so where the risk on new longs the SPY or the QQQ can be well controlled.